Mark Masons’ Hall in London is the headquarters of The Grand Lodge of Mark Master Masons of England and Wales, which also controls the Royal Ark Mariner degree. It is located in 86 St James’s Street in the central London district of St James’s, opposite St James’s Palace. While Freemasons’ Hall is the headquarters of the United Grand Lodge of England and the Supreme Grand Chapter of Royal Arch Masons of England, Mark Masons’ Hall is the home of several other important appendant orders of Freemasonry in England and Wales. Over the years, many London Craft Lodges have made Mark Masons’ Hall their permanent meeting place.
86 St James’s Street is a Crown property and Grade II listed. At the time of its construction between 1862 and 1865, the building was described as “High Victorian”. The property consists of seven levels which includes the lower ground floor and basement.

On the ground floor it consists of four bays which are all arched. The right hand bay at the top of a flight of stone steps provides the main double doorway entrance. The windows on the first and third floors are arched including the four stone dormer windows on the top floor. Above the steeply pitched slate roof at each side stand two tall rustic banded chimney stacks. The main entrance leads to a paneled entrance hall and a free standing staircase, constructed from stone steps with an open well and cast iron ornamental balustrade.

There are three large rooms on the ground floor, two of which are used as Masonic temples and the other a Board Room. On the first floor there is a front dining room which overlooks St James’s Street as well as St James’s Palace. The rear areas on this floor are used for dining and day time meetings. On the second floor, there is a licensed bar at the front. The rear areas on this floor house two more Masonic temples. The third floor houses three dining rooms and two further Masonic temples. The fourth floor is occupied by offices. The seven Masonic temples were all dedicated on 30 September 1980 and are named Grand Temple, Brazil, Bristol, Hong Kong, River Plate, Warwickshire and Johann Gutenberg. 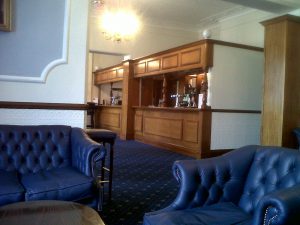